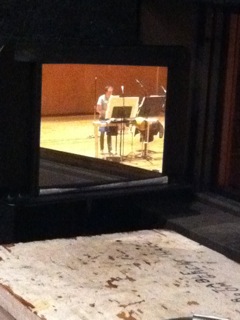 This work was inspired by a road trip through Pennsylvania. As I drove through the state’s multitude of valleys, I selected the “scan” mode on the radio, which would play five seconds of a station with strong reception before moving to the next one.

I was enthralled by the variety of the broadcasting: music, talk radio, static, and complete silence.

As the journey progressed, the presence of so many small towns within the small valleys caused many of the stations to share signal crosstalk, which I found most fascinating.

This crosstalk reminded me of my youth in deep South Texas. The land area, while quite large, had very few radio stations on the American side of the border. As a result, I spent many nights—when the radio signals traveled farther without interference—listening to rock stations broadcast from Mexico and from other distant cities in Texas.

This work was commissioned by Zack Penckofer and dedicated to him as well as Michael and Quinn Collins.